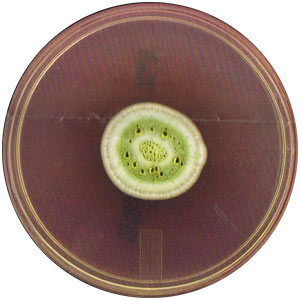 Another member of the Aspergillus genus, Aspergillus versicolor is closely related to A. sydowii. It is commonly found in soil and decaying organic matter, and has been known to develop on many kinds of food, including cereal grains, seeds, nuts, dried meats and dairy products [1]. It can frequently be found indoors, particularly on water-damaged buildings or materials such as wallpaper, carpets and insulation.

A. versicolor is unique in that it can appear in a wide range of colours. Initially, A. versicolor appears white but turns yellow, tan, pale green, or pink over time. It can often be observed in an emerald green colour with a powdery texture. It has a musty or earthy odour and is a common indicator of moisture, humidity and ventilation problems in buildings.

A. versicolor can produce mycotoxins (sterigmatocystin and cyclopiaxonic acid) that can cause diarrhea and an upset stomach if ingested in moderate quantities. Sterigmatocystin is structurally similar to aflatoxin, and has been reported to be a kidney and liver carcinogen [2]. However, A. versicolor is only occasionally pathogenic.

A. versicolor is a highly resilient fungus, capable of growing in many extreme conditions, including those of very high salinity. It has been found in the arctic regions as well as in the Mir space station and the Dead Sea.

Let’s take a closer look at this potentially hazardous fungus, what it’s capable of, and what exactly we can do about it.

Video: What is Aspergillus versicolor?

What exactly is Aspergillus versicolor?

This is a species of fungus belonging to the Aspergillus genus, which consists of approximately 200 species.

It can be encountered all over the world in various climatic conditions as it is a particularly hardy fungus.

As a matter of fact, it has even been reported in places such as the Mir space station [3], the Dead Sea [4], one of the saltiest bodies of water on earth, regions of the Arctic where it tolerates extremely low temperatures, and even Uranium mines.

As interesting as this is, it only means that as far as A. versicolor is concerned, the environments in our homes are like a 5 star hotel!

What kind of mold is Aspergillus versicolor?

A. versicolor is osmophilic, meaning it has the ability to survive and reproduce in solutions with high concentrations of sucrose or sodium chloride. It is also considered to be xerophilic, meaning it can grow in a relatively dry environment. In the optimal temperature range, it can grow at water activities as low as 0.75 [5].

A. versicolor differs somewhat from the rest of its genus members in the matter of appearance. While most other Aspergillus species will be of a more or less uniform, single coloration, A. versicolor molds go through a variety of colour tones throughout their development.

That’s actually what the name “versicolor” refers to. It will typically start off as white, but gradually turn yellow, then orange, green, and take on specks of pink and fleshy tones as it continues its development. The texture of the mold formation will be powdery to the touch.

How quickly does the Aspergillus versicolor grow?

Even though A. versicolor has the ability to grow just fine in temperatures ranging from 4-40°C, its optimal growth range is between 22 and 26°C.

Exactly how quickly the mold will grow depends on numerous factors including the location of the growth, ambient temperature, exposure to fresh air and so on.

As a general rule, you can expect a fresh growth of A. versicolor to take from 1 to 3 weeks to cover an area of about two square feet, especially in places that have seen recent water damage and remain damp.

Where can you find Aspergillus versicolor mold?

As mentioned earlier, all types of mold like to grow in damp places. In your home, this will usually mean places such as ventilation ducts, damp basements and attics, wallboards, and insulation fittings.

The risk of developing a growth of mold becomes exponentially higher should there be leakage somewhere or recent water damage in these places.

The mold reproduces by producing lightweight spores that are dispersed through the air to new breeding grounds. These spores can negatively affect our health if we happen to inhale a significant amount of them.

That’s part of what makes it such a dangerous situation – mold growths in remote and isolated areas of the home often go unnoticed until their effects are felt in full force.

As part of the data analysis presented inside our Mold Statistics resource page, we have calculated how often mold spore types appear in different parts of the indoor environment when mold levels are elevated. Below are the stats for Aspergillus versicolor:

What allergies are caused by Aspergillus versicolor?

Allergies are excessively powerful reactions by the human body to allergens, or foreign materials, entering the body.

A. versicolor spores are known allergens that may trigger allergic reactions in people who are particularly sensitive to them, with children, older people, and those suffering from lung conditions being most at risk.

The signs of an allergic reaction include:

Those with asthma are at a particularly high risk of experiencing difficulties related to A. versicolor exposure.

Can Aspergillus versicolor raise an infection?

Should a person be exposed to a large quantity of A. versicolor spores, the mold can actually begin to grow in their lungs, which is a serious condition known as aspergillosis [6].

What happens is that the mold will grow to form a toxic fungal ball in the lungs which then proceeds to deposit allergens and harmful toxins directly into the patient’s bloodstream.

Once things have progressed to this point, there will be noticeable health effects including weight loss, coughing up blood, lack of energy, breathing difficulties, and persistent coughing. If left untreated, aspergillosis can potentially be fatal. However, this is rarely the case as antifungal treatment is usually very effective. Besides, most serious cases of aspergillosis occur in people with weakened immune systems, often as a result of another disease.

Aside from aspergillosis, A. versicolor has also been known to cause onychomycosis [7], which is a fungal infection of the nails of a person’s hands and feet, although it most commonly attacks the toenails. The nails will turn yellow or white, thicken considerably, before eventually falling off entirely.

If a person’s immune system is already weakened as a result of conditions such as leukemia, AIDS, cancer, or recent organ transplantation, they might at be at risk of developing invasive pulmonary aspergillosis which is a potentially deadly infection that comes with pneumonia.

In cases where patients don’t respond to medication or surgery, the condition can eventually lead to their demise.

Aspergillus versicolor treatment – How to get rid of it?

As you can see, the dangers associated with A. versicolor are quite severe, and the best way to deal with such a threat is to avoid it entirely.

This can is done by ensuring our homes are entirely free of any Aspergillus mold growths.

However, this is easier said than done. As much as we try to keep our homes free of dampness and places for the mold to develop, there is always the chance that it may take root in a hidden nook or cranny in your home.

Should you ever notice signs of mold growth somewhere in or around your home, it’s best not to try and get rid of it on your own, no matter how simple it may look.

In the process of clearing the mold, you may accidentally inhale a large density of the spores and fall ill. Professional mold removal services are there to help you handle a mold outbreak safely and effectively.

We have a proven track record when it comes to mold removal. We are able to remove any hidden growths you might miss on your own provide advice on how to ensure the growth does not happen again in future. Stay safe and call in the experts when dealing with any such hazardous situations.