Aspergillus ustus is one of the most ubiquitous soil-borne Aspergillus species [1]. This species is distributed worldwide, mostly in the tropics and subtropics [1]. According to the records, it commonly grows in soil, forests, desert soils, salt-marsh, and unusual habitats such as uranium mines and bat caves [1]. A. ustus strains can also be found in food and indoor air environments [2]. This species is a rare human pathogen, causing invasive infection (aspergillosis) in immunocompromised people [2]. 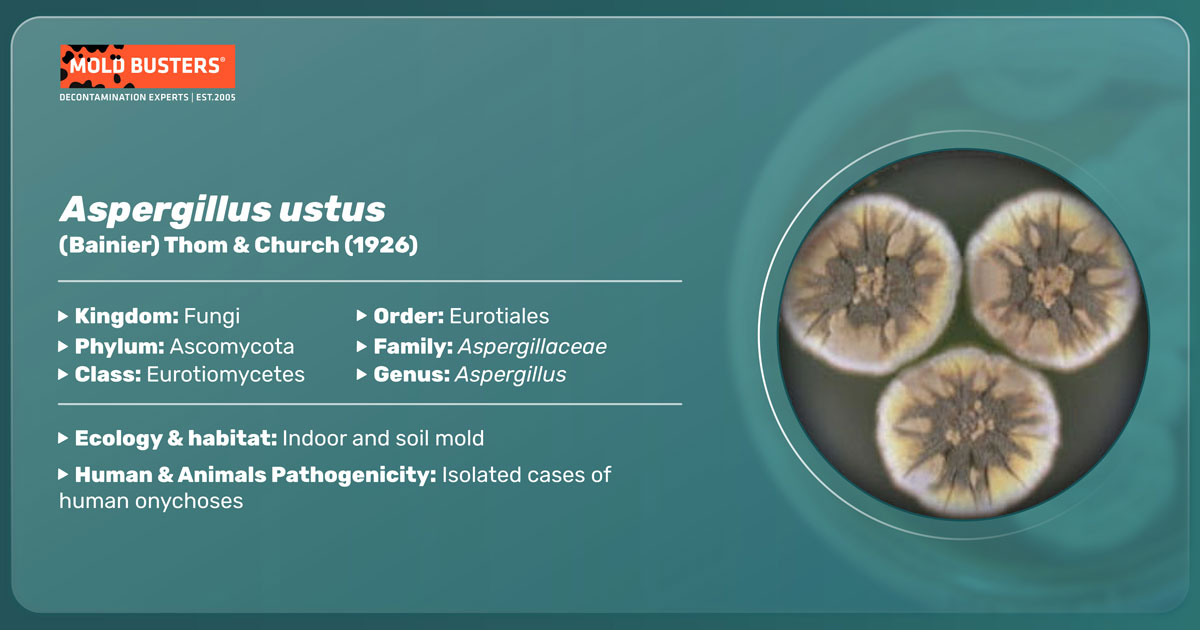 The genus Aspergillus is divided into 7 subgenera that are subsequently divided into particular sections [3]. Sections consist of closely related species that cannot be precisely distinguished and identified based on morphological characteristics since some aspergilli can exhibit slow sporulation or form atypical conidiophores [4]. Along with seven related species, A. ustus is classified in the section Usti [4]. Since certain species from the Usti section can cause human infections while showing different sensitivity to antifungal agents, delineation of these species is of immense importance for treating infected patients. As identification based on morphology is unreliable, secondary metabolite profiles are an important factor in species determination [3, 4]. Secondary metabolites are compounds synthesized by fungi that are not necessary for their growth and reproduction but play certain roles in pathogenicity, virulence, and adaptation to environmental factors [5].

One of the most important tools for quick and precise identification of Aspergillus species at the molecular level is comparative genomic analysis (comparative DNA sequencing) [3, 4]. Genome is the entire genetic information of an organism, and the fungal genome consists of chromosomal genes and extrachromosomal components such as mitochondrial and plasmid DNA [7]. It is reported that the genome of A. ustus has a total length of ~38.3 Mbp (Mbp = Mega base pairs = 1,000,000 bp = fundamental unit of DNA) with an average G+C (Guanin + Cytosine base pairs) content of 50.5% (the content of a genome used in taxonomic descriptions of species) [5].

The comparative genomics approach is particularly promising for delimiting species within Aspergilli [3, 4], such as A. ustus, whose biology and genetics are insufficiently explored [5]. According to the results obtained by Pi et al. (2015) and Ruan et al. (2014), A. ustus is most closely related to A. nidulans, which is the model organism for studying the development and metabolism of aspergilli [5, 6].  These two species share a large number of highly similar genes (> 75%) [5, 6]. However, their genome size varies significantly, resulting from gaining and losing certain genes through adaptation evolution [5]. Extensive differences are identified mainly between gene sequences that encode enzymes important for synthesizing secondary metabolites [5].

How to identify Aspergillus ustus?

Based on phenotypic (observable) characteristics, A. ustus isolates can be identified morphologically and according to their secondary metabolite profile [2]. A. ustus cannot grow on Czapec Yeast Agar at 37°C (99°F), while at 25°C (77°F) for 7 days of cultivation on Yeast Extract Sucrose Agar forms colonies 43-49 mm (1.7-1.9 inches) wide. The conidial color on Malt Extract Agar is brown, while the mycelium color is faint yellow when cultivated on Creatine Agar (a medium that often suppresses sporulation). The production of indol metabolites is also a beneficial characteristic, and A. ustus shows no reaction in contact with Ehrlich’s reagent (positive reaction gives violet color) [2].

When it comes to identification at the molecular level, studies have shown that sequences coding structural and messenger cell proteins (such as β-tubulin, actin, and calmodulin) are excellent markers for species determination within the section Usti [3, 4, 7].

Which infections are caused by Aspergillus ustus?

Despite its inability to grow at 37°C in culture [2] A. ustus is considered an opportunistic human pathogen [3]. A. ustus rarely causes human infections. However, they may be of particular concern due to decreased susceptibility of this fungus to antifungal drugs like amphotericin B, caspofungin, itraconazoe, voriconazole, and posaconazole [3, 7]. The spectrum of infection includes nail infection, ear infection, eye infections, skin infection, endocarditis, and pneumonia among immunocompromised hosts, and in some cases, can be disseminated to other body parts [7].

What are A. ustus infection symptoms?

How to treat Aspergillus ustus infections?

Since A. ustus isolates exhibits poor sensitivity to various antifungal agents and treatments [3, 7], this species is emerging as a cause of systemic infection among immunocompromised hosts [10]. Therefore, it is important to establish valid microbial diagnoses at the species level to determine therapy and control the spread of the disease [10]. Also, the sensitivity of A. ustus to terbinafine was reported, indicating that this drug could be promising in treating invasive aspergillosis [3, 10].