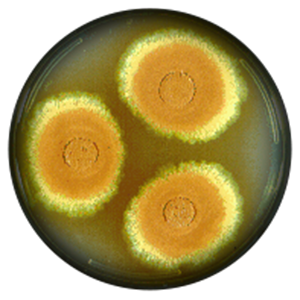 What is Aspergillus tereus?

Aspergillus terreus is a filamentous fungus belonging to the Aspergillus section Terrei [1]. A. terreus is distributed worldwide and is commonly found in various natural habitats such as soil, grasslands, desserts, and compost heaps and stored grains [1,2,3]. A. terreus can also be pathogenic, causing opportunistic infections in humans [1, 2] and plants such as whey, rye, and potato [3].

Aspergillus terreus is well-known for producing economically significant compounds such as lovastatin (the drug that decreases blood cholesterol) and cyclosporine A (an immunosuppressive drug) [1]. It is also reported that this fungus synthesizes metabolites considered mycotoxins such as citreoviridin, patulin, citrinin, emodin, terretonin, geodin, territrems, gliotoxin, and cytochalasin E [1].

The morphology of Aspergillus terreus

When grown on Saubouraud Agar at 37 °C (98.6 °F) for 48 hours, A. terreus colonies are cinnamon-brown or white when grown on Potato Dextrose Agar [1, 3]. On Czapek agar, A. terreus grows rapidly, forming colonies that can be richly sporulating or fluffy, poorly sporulated [4]. A. terreus hyphae are segmented and branched [1,3]. Conidiophores (spore-bearing structures) are long, colorless, with conidia arranged in two rows (biserate) (Fig. 1) [4]. Conidia are 1.5-2.3 μm in diameter, globose to elliptical with smooth walls [4]. A. terreus also produces accessory conidia known as aleuriconidia or aleurospores [1, 3, 4]. These additional conidia are globose; glass-like cells formed laterally on the hyphae [4].

Since the species identification based on morphology is unreliable, more precise tools for identifying Aspergillus species at the molecular level is comparative genomic analysis (comparative DNA sequencing) [5]. Studies have shown that sequences coding structural and messenger cell proteins (such as β-tubulin and calmodulin) are excellent markers for species determination within the section Terrei [5].

The genome (the entire genetic information of an organism) of A. terreus has a total length of 28-32 Mbp [6, 7] (Mbp = Mega base pairs = 1,000,000 bp = fundamental unit of DNA) and 10,401 protein-coding genes [7]. The most studied part of the A. terrei genome is probably the gene cluster (group of two or more genes that encode similar proteins) responsible for the biosynthesis of lovastatin [8].

The most common infection caused by filamentous fungi among immunocompromised patients is invasive aspergillosis, and about 15% of such cases are due to Aspergillus terreus [2]. In highly immunocompromised hosts, A. terreus causes infections ranging from superficial infections to allergic bronchopulmonary aspergillosis, aspergilloma (a fungus ball composed of Aspergillus hyphae with cellular debris and mucus), and invasive diseases [1]. Compared to other Aspergillus species, A. terreus infections have been linked to dissemination and higher mortality [1]. Most affected individuals are the patients suffering from low blood cell count, transplants, inherited or acquired immunodeficiencies, and patients using corticosteroid drugs [1]. However, A. terreus also affects non-immunocompromised patients with underlying lung disease [1]. According to the reports, A. terreus is involved in many diseases such as blood malignancies, tumors, heart, kidney, and liver diseases [1].

A fungal infection of the nail plate and surrounding tissues is called onychomycosis and represents about 40-60% of nail diseases, making it a growing public health problem [9]. This condition affects mostly people older than 60 years and immunocompromised patients, patients with diabetes, and patients with blood circulation disorders [9]. It can be caused by dermatophytes (fungi that require keratin for growth, such as ringworm), yeast (such as Candida albicans), and non-dermatophyte molds like Aspergillus species, Fusarium species, Acremonium species, and Scytalidium species [9]. Acting like contaminants, colonizers, or pathogens, non-dermatophytes can infect people using public swimming pools and bathrooms or manicures [9]. Toenails are infected twenty-five times more frequently than fingernails by Aspergillus sp. [10], and A. terreus is reported to affect the toenails of the first toes [9].

Nail infection caused by Aspergillus spp. begins under the nail where spores may get stuck, at the lateral nail folds, or on a diseased nail plate colonized by fungus [10]. Starting to grow, the fungus causes the infection to spread back toward the cuticle (skin along the bottom edge of a finger or a toe) [10]. It causes nail discoloration, thickening, distortion, and flakiness. Nails can become chalky and painful without pus [10]. A nail infection caused by Aspergillus species may disseminate in immunosuppressed patients, becoming the door to systemic, more threatening infections [10].

Due to resistance to amphotericin B, preferred agents for treating invasive aspergillosis caused by A. terreus in most patients are triazoles (such as vorriconazole and isavuconazole) [1]. Prevention and early antifungal treatment are important and immunomodulation, but in some cases, surgery is necessary [1]. Strategies for treating invasive A. terreus infection need to be based on an epidemiology assessment and individual risk factors [1]. When it comes to treating infected nails, it is important to note that inadequate therapy may cause resistance and recurrence of infection.

The duration of treatment depends on which nails are affected and the severity of the infection. Infected fingernails typically require three months of treatment, while healing of toenails lasts six months or longer [10].