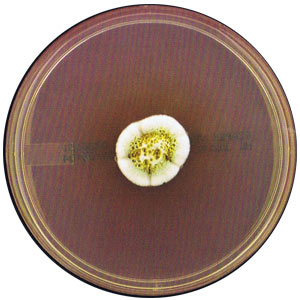 Every homeowner knows that keeping their household clean is one of the most important measures they can take to ensure the health and well-being of themselves and their loved ones.

One of the biggest threats on this front comes from a particularly nasty fungus known as Aspergillus sydowii. It is pathogenic in nature, meaning it can negatively affect the health of those who are exposed to it in various ways.

Let’s take a closer look at this hidden menace and see just what it’s all about, what it’s capable of, and exactly what you can do about it.

Aspergillus sydowii is a species of fungus first described by French botanist and mycologist Georges Bainer in 1923. In nature, it is typically found in soil, on seeds and on decomposing organic matter. It is the predominant fungus found on wheat and can contaminate a variety of dried foods, typically nuts, but also rice, beans, spices and dried meat products [1].

Colonies of A. sydowii are blue-green with reddish-brown shades. It grows slowly at 25°C and often not at all at 37°C [1].

A. sydowii has been found in sea water in the Caribbean and Mediterranean and has been shown to cause aspergillosis in sea fans, a widespread type of coral [2]. Occasionally pathogenic, it can cause several diseases in humans including aspergillosis, onychomycosis and keratomycosis [3].

A closer Look at Aspergillus sydowii

A. sydowii can be found in various regions of the world, where it has varying effects on local conditions. In China, for example, it’s one of the vital components used in traditional wine-brewing processes [4].

In the seas off the Caribbean coasts, it has a less helpful impact, being the cause of aspergillosis in sea fans. Recently, similar findings have been made in the Mediterranean and also in seas of the coast of Australia [5, 6].

Little is known about how exactly it made its way into the ocean, as the fungus doesn’t reproduce in marine environments, although some researchers suggest that it was brought into the water in the feces of one of the sea fan’s predators, the flamingo tongue snail [7].

Another theory as to its origin in the water explains that it is the result of dust storms in Africa carrying fungal spores and depositing them in the ocean [8], where they wreak havoc on the sea fans therein. Sea fan populations in these affected waters have been decimated by widespread infections.

The answer is a definite yes. As a member of the Aspergillus genus, A. sydowii is one of over 200 types of Aspergillus mold formations to be found all over the world.

Mold can form in various places within your home, although it generally favours areas that are exposed to moisture, especially papered walls and wallboard.

If you’ve ever seen some slimy looking black patches on the curtains in your shower, patches of fuzzy white growth in your basement or attic, or a reddish-orange film on the surface of your kitchen drain, then you’ve seen mold in your home.

Mold reproduces by creating and releasing microscopic spores that are light enough to be carried in the air. This is precisely how they can potentially damage our health, as we are constantly breathing in the air they are present in.

The severity of the diseases, conditions, and allergies caused by A. sydowii may vary, but they are all cause for concern among the various health organizations worldwide tasked with keeping people safe from such threats.

Where can Aspergillus sydowii mold appear in your house?

Just like any other type of mold, A. sydowii tends to grow in areas with a bit of moisture or dampness such as bathrooms, kitchens, basements, attics, stuffy rooms, heating ducts, and ventilation airways.

Keep an eye out for any suspected mold growth in your home, and be especially wary if you see it spreading rapidly. This means that it is thriving and likely releasing spores into the air of your home at an alarming rate.

What are allergy symptoms caused by Aspergillus sydowii?

We are usually exposed to various types of mold spores in the air outside every day in small quantities, and this will usually be harmless to us. Our immune systems have evolved alongside fungal spores for thousands of years and are well equipped to handle this sort of threat.

However, when we come into contact with certain types of mold spores, or an excessive concentration of spores, our bodies might ‘overreact’ to their presence in such a way as to cause us discomfort and possible illness – this is basically what an allergic reaction is.

Should you be allergic to A. sydowii spores, you might experience a reaction characterized by one or more of the following symptoms: a runny nose, constant sneezing, coughing, skin rashes, or red and itchy eyes.

For seriously allergic individuals, the effects might be even more hard-hitting and may include shortness of breath, tightening of the chest, nausea, or even asthmatic attacks in people who suffer from asthma.

Children, infants and the elderly are particularly sensitive to the irritant effects of A. sydowii spores, as are those with underlying lung conditions. Another at risk group are people with a weakened immune system caused by conditions such as cancer, organ transplant, or HIV.

While the more severe effects of this mold are rare occurrences, it’s always better to keep you and your loved ones on the safe side when it comes to these things.

What are health effects of Aspergillus sydowii to human body?

While the allergic reactions we’ve mentioned might not seem to be too threatening, you must remember that certain species of fungi can cause diseases regardless of whether or not you’re allergic to them. A. sydowii is one of them.

Along with other species of Aspergillus, it has been credited as being the cause of three main health conditions, and there is the possibility of serious consequences in some instances. They are as follows:

How to treat and remove Aspergillus sydowii?

While it’s always nice to be able to keep your home in good condition by ourselves, mold growth may often require professional intervention.

Should you spot a patch of mold early (before it spreads to more than the size of a handkerchief), you might successfully deal with it yourself with some strong cleaning products and a tough-bristled brush.

However, if you notice that the mold has developed rather quickly (you didn’t notice it last week, for instance), or if it’s in a hard-to-reach area, you might be better off leaving the job to professionals.

You don’t want to risk inhaling a large dose of spores in the process. A professional mold removal service will be able to get rid of the potentially harmful mold effectively and thoroughly, getting rid of any hidden bits you might miss on your own.

We will also be able to advise you on the steps you can take to prevent any future buildup of mold in your particular home environment.

We all deserve to feel safe in our own home, and molds such as Aspergillus sydowii can pose a hidden threat to us unless we’re vigilant. Be sure not to attempt any mold removal activity unless you are certain that the inhalation risks are minimal. Your safety should always be your number one priority.

To test your home for Aspergillus sydowii or any other mold, contact Mold Busters for a complete list of our mold testing and mold removal services.