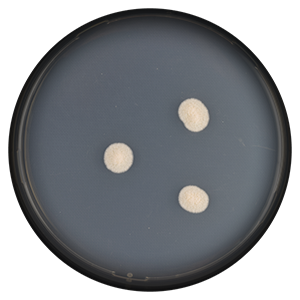 Aspergillus restrictus is a mold fungus belonging to the section Restricti of the Aspergillus genus. This section comprises species that are xerophilic (and some also osmiophilic), which means they grow in environments with low availability of water (substrate water activity) [1, 2].

Where can Aspergillus restrictus be found?

According to data, A. restrictus is distributed in different world areas, being found in soil, on building materials, in house dust, on seeds of corn, wheat, and barley. As it is an osmophilic organism, it can be found in dried, salted foods or high in sugar content [1, 3].

As a xerophilic species, A. restrictus grows at a substrate water activity (aw) below 0.8 (which is equivalent to the vapor pressure of 80 % of pure water) [2]. Wheat seeds’ growth is significantly limited when the moisture content is below 6-13 % [3]. The optimum growth temperature is 25 °C (77 °F), and the most efficiently utilized energy source is sucrose [3]. It is reported that A. restrictus can grow on media that contains 60% sucrose at 37 °C (99 °F) [2].

In vitro, A. restrictus is preferably grown on Czapec yeast extract agar (CYA) with 20 % sucrose, forming colonies that reach 3-4 cm (1.2-1.6 inches) in diameter in 14 days [3]. It is also cultivated on DG18 medium (Dichloran agar with 18 % glycerol) [2], forming small (restricted) colonies about 1 cm (0.4 inches) in diameter in 7 days (Fig. 1). Both media are suitable for isolation and growing xerophilic molds since sucrose and glycerol lower water activity, enabling colonies of A. restrictus to grow more rapidly [3].

The colonies are dark, olive-green, and very limited size, up to 4 cm (1.6 inches) [2, 3, 4]. The texture is velvety, with a wrinkled central area with distinctive aerial hyphae crossing conidiophores [2, 3]. Conidiophores are 75-200 µm long, glass-like and smooth-walled, have a flask-shaped vesicle, and lack metulae (sub-conidiogenous cells) [3]. Conidial heads are long and twisted [4], with green and ornamented conidia that grow in raw, arranged in a columnar fashion, which is a distinguishing characteristic of the species (Fig. 2) [2].

It is reported that cultures of A. restrictus produce restrictocin, a compound that shows toxicity to cells by inhibition of protein synthesis [5]. This compound is secreted during the conidiation stage (the production of asexual spores). The antitumor effects of restrictocin were investigated; however, human clinical trials showed its non-specific toxicity (equally toxic to all cell types, not only to target tumor cells) [5].

Dried and cured foods, including cereals, nuts, spices, and dried meat and fish, can be spoiled by a range of xerophilic fungi such as Eurotium, Wallemia, Aspergillus, and Penicillium species [6]. Prevention of fungal growth in these foods is normally obtained by keeping the water activity (aw) sufficiently low. A. restrictus is a species that can cause spoilage of jams, juices, and dried fruit products, cereals, spices, and nuts. It is a very important early colonizer of stored commodities. However, it may often be overlooked because of limited growth on usual media for mold isolation [6]. Since adding preserving substances such as sorbate and propionate applies only to food with higher moisture content, preventing the growth of A. restrictus and other xerophilic species depends only on good sanitary practice during the manufacturing and packing of products [6].

A. restrictus is one of the most common household fungi that grows well in dust and dry organic substrates. As such, it could be a significant causal agent of childhood asthma and atopy since young children spend much time indoors [7]. This mold species is found in floors and carpets, mattresses, and furniture dust, as well as in cotton fabrics, clothes, and the air from air-conditioning systems [8]. It is reported that species belonging to the Aspergillus restricti section make up 87 % of the fungal spore profile isolated from house dust in Japanese homes [9].

According to the reports [7], the incidence of hypersensitivity to A. restrictus in asthmatic children is comparable to the immunological reactions caused by well-known allergens Aspergillus fumigatus and Alternaria alternata. Studies suggest that these three species share major allergenic components, confirming the allergic cross-reactivity [7]. About 10-15% of patients studied in one hospital in Japan were positive for xerophilic indoor fungi, particularly A. restrictus and Eurotium spp. The sensitivity did not change with age. However, middle-aged and elderly patients were mostly affected [9].

It is assumed that A. restrictus can initiate the development of fungal allergies in early childhood since it is commonly present in the home dust due to its ability to survive in very dry conditions. On the contrary, A. fumigatus and A. alternata are considered less significant contributors to allergic reactions that occur indoors, as their spores cannot germinate at the humidity commonly found in domestic environments [7].

Although hypersensitivity caused by A. restrictus still hasn’t been officially clinically confirmed, according to Environmental Laboratory Diagnostics [10], this species is recognized as a rare, opportunistic human pathogen. Considering its endurance in dry conditions, the abundance of its spores in home-dust specimens [7, 9], tendency to cause food spoilage [6], and cross-allergenicity with other allergenic species [7], this way, A. restrictus spores, and hyphal fragments should be kept at a minimum in homes and buildings. This should also be applied to any other species with proven allergenic effects. Isolation and identification of these organisms should be performed following appropriate protocols, so engaging well-equipped and trained professionals is highly recommended.