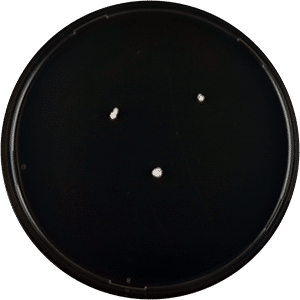 Aspergillus penicillioides was originally described by Spegazzini in 1896, and the species is reproducing strictly asexually via conidia (1). This is a truly hardy organism, being able to grow and germinate in low water activity (xerophilic), endure high osmotic pressure (osmophilic), and thrive in high salt content (halophilic). A. penicillioides can grow in close to freezing temperatures and under anaerobic conditions, and it is also sometimes connected with aspergillosis.

Aspergillus penicillioides mostly don’t grow large when cultivated. On Czapek Yeast Extract Agar (CYA), it forms up to 5mm (0.2-inch) colonies, and on Malt Extract Agar, it rarely grows larger than microcolonies (Fig. 1). When grown on glycerol nitrate agar culture media, it can form 8–15mm (0.3–0.6-inch) diameter colonies. The colony surface is usually irregularly wrinkled and with a velutinous texture. Areal hyphae are limited, and mycelium is usually inconspicuous when observed.

Conidia (asexual spores) are produced in moderate amounts, and the surface has a dull-green to white color. Conidiophores (conidia-bearing structures) are borne from the surface or sometimes on aerial hyphae, 300–500 µm long. The heads are semi-spherical, characteristic of aspergilli, with phialides 8–11 µm long, bearing conidia. Conidia are at first ellipsoids, at maturity becoming ellipsoidal, 4.0–5.0 µm in diameter. Morphologically, A. penicillioides is similar to A. restrictus, distinguished by a very weak growth during normal growing conditions (2).

Aspergillus penicillioides is xerophilic, grows very poorly on media with high (or even moderate) water activity (aw), and doesn’t prefer high temperatures. The higher is the temperature and the lower the water content is needed for optimal growth. The optimal aw for growth is 0.89 at 30°C (86°F) at pH 5.5 on glucose media. When growing on media containing glucose or NaCl with a water activity of 0.91–0.93, it will optimally grow at 25°C (77°F) at pH 6.5. In its natural substrates (grain or dehydrated foods), A. penicillioides can grow and germination at a much lower moisture content (aw = 0.68). A. penicillioides doesn’t grow at temperatures higher than 37°C (98.6°F) (2,3).

Aspergillus penicillioides is often isolated in great amounts from a wide variety of food products and commodities such as flour, dehydrated fruit, and fish. It is also often contained in spices, including pepper and dried chilies. A. penicillioides quite frequently contaminate food commodities coming from the South-eastern Asian region. Control of these products often shows a low overall proportion of A. penicillioides but high individual contamination of this species. This reflects prolonged storage at moisture content just above safe limits.

The two main genera causing spoilage during storage are Aspergillus and Penicillium; however, Aspergillus penicillioides get overlooked because of their xerophilic properties. A. penicillioides predominates in grain at a water activity of 0.68–0.75, causing a condition known as “sick wheat”. During this infection, the fungus damages the germs of grain when the moisture content is around 14%, and the grain germs are killed before fungal growth becomes visible. Also, if left unintended, A. penicillioides growth can open the way to microbial succession, destroying the entire stored grain yield (2).

During uncontrolled grain storage, A. penicillioides is among the first species to appear, raising the grain’s temperature to between 35–40°C (95–104°F). This, combined with grain respiration and moisture generated by the mold growth, will raise the water activity and allow A. candidus, A. ochraceus, and A. flavus to grow. At this point, the grain might reach temperatures of 50–60°C (122–140°F) when truly thermophilic species might germinate, such as Humicola lanuginosa, Thermoascus crustaceus, T. aurantiacus, which raise the grain temperature even more and open the way to thermophilic bacteria. At this point, considerable discoloration and blackening of the kernels can occur, leading to the loss of nutritional value of the grain and a reduction of its germinability (2,3).

Aspergillus penicillioides encourage the reproduction and activity of dust mites. When mite species such as Dermatophagoides pteronyssinus were grown in sterile conditions (without fungi mycelium), their growth and performance were considerably lower than when supplemented with the A. penicillioides. It turns out that the fungus has nutritious value for the mites, specifically providing its spores, vitamins B and D. However, a more critical aspect of their relationship is reflected in that the fungus predigests some of the elements of human skin (dandruff, fats, and keratin), making it more easily accessible to the mites. However, this relationship benefits mites to a point because if A. penicillioides germinates and grows in large amounts, it will outcompete mites for resources and inhibit their development (4,5).

Aspergillus penicillioides is a common indoor fungal species found in damp buildings where it has been associated with allergic rhinitis, also known as “hay fever”. This is a type of respiratory inflammation which occurs when the immune system overreacts to some allergens in the air. These allergens are often of mold origin but may also include pollen, pet hair, or dust. Symptom onset of hay fever may often occur within minutes following allergen exposure and may include sneezing, itchy and watery eyes, and swelling around the eyes (6,7).

Stimulated growth of house dust mites by A. penicillioides can also have adverse health effects. They can activate specific immune cells, which release mediators like prostaglandin and histamine, thereby enhancing allergic airway inflammation. A. penicillioides can also be implicated in aspergillosis infections such as keratomycosis (fungal keratitis). This is an invasive infection of corneal stroma caused by fungi and is manifested with a red, painful eye and blurred vision, which can ultimately lead to blindness (8–11). A. penicillioides is considered a typical mold for homes with water damage and is therefore listed in the Group 1 of the ERMI (The Environmental Relative Moldiness Index) list of potentially hazardous fungi (12).