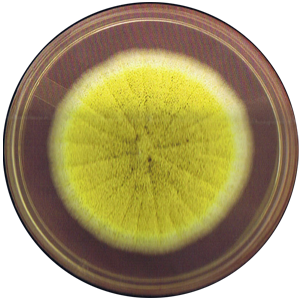 A member of the Aspergillus genus (comprising about 200 species of fungus worldwide), Aspergillus ochraceus is a species of mold that is frequently found in grains, soil, and dried food products. This species produces ochratoxin A (OTA), a potent mycotoxin that can cause serious kidney damage.

Because the spores molds use to reproduce are easily airborne, colonies can develop practically anywhere – both indoors and outdoors (particularly in damp environments): soil, water-storage tanks in hospitals, fireproofing materials, bedding, pillows, ventilation ducts and other types of HVAC systems. 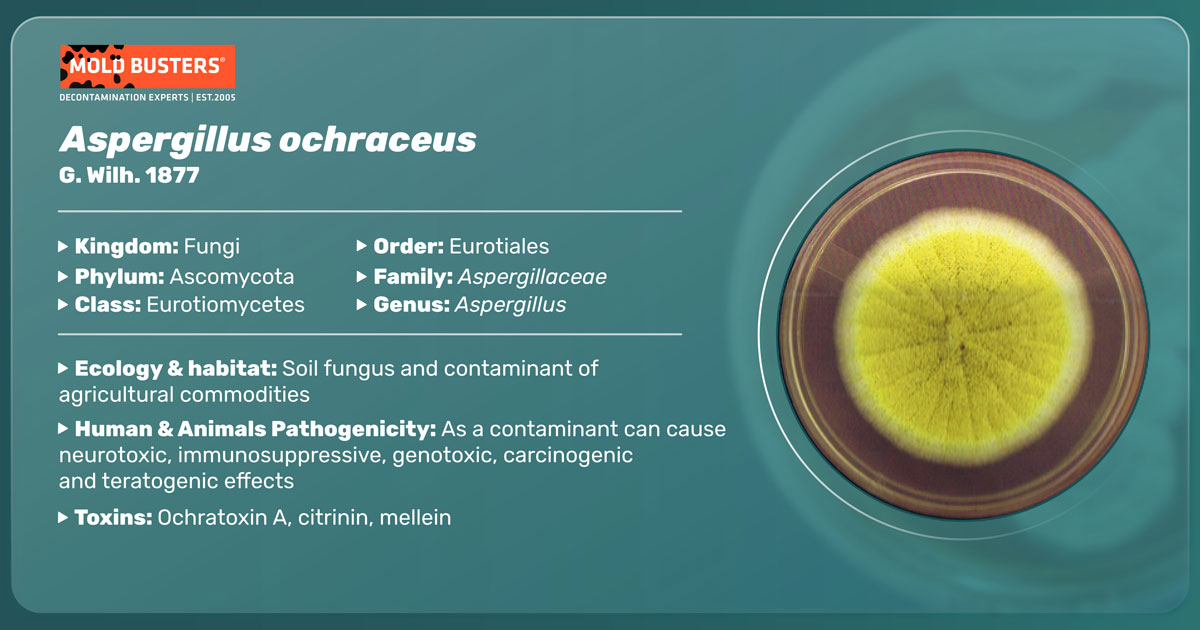 Anyone at all familiar with mold in all its various forms will have heard of Aspergillus ochraceus.

Let’s take a closer look at this particular mold species; where it can be found, what harm it can cause, and just how we can keep ourselves safe from it. When possible it’s always better to avoid trouble and not have to spend time and effort dealing with its consequences.

Video: What is Aspergillus ochraceus?

Where does Aspergillus ochraceus mold grow?

While the original habitat where this fungus made its home was the soil, over time it has developed and evolved the ability to grow in a variety of environments, particularly in warm, damp places. It is commonly found on dried foods, including dried meats, fish and various dried beans, nuts and seeds.

A. ochraceus colonies can develop at temperatures in the range of 8-37°C, but they grow optimally between 24-31°C. They require a significant level of moisture to develop, and are best adapted to water activity levels between 0.95-0.99 [1].

The need for a damp environment is a common trait of many types of mold, especially those that we encounter in our homes. Places such as basements, attics, ventilation units, air vents, storage cupboards, bathrooms, laundry rooms, and all such places can be a potential home within your home for mold.

Like many types of mold, A. ochraceus can also be found growing on a variety of plant life including peanuts, corn, rice, and various types of fruits and tree nuts.

The hemp or cannabis plant is also among the affected. The presence of the mold on such plant products should possibly be a cause for concern. There have been several studies highlighting the connection between marijuana use and pulmonary aspergillosis [2, 3, 4, 5].

Vaporizing the marijuana, rather than smoking it, may increase the risk of infection – the lower temperatures likely aid the survival of fungal spores. Considering the resent changes in cannabis legislation in Canada, this is definitely food for thought.

What are known species of Aspergillus ochraceus?

A. ochraceus was first described by Karl Adolf Wilhelm in 1877. Subsequently, several other similar species were added to the “Aspergillus ochraceus group”. These include A. alutaceus (1875), A. ochraceus var. microspora (1908) and A. ochraceus var. petaliformis (1957).

In 1979 two new species were added to the group – Aspergillus bridgeri, which was discovered in the soils of southern Wyoming, and Aspergillus campestris, first found in North Dakota.

As part of the data analysis presented inside our mold statistics resource page, we have calculated how often mold spore types appear in different parts of the indoor environment when mold levels are elevated. Below are the stats for Aspergillus ochraceus:

Aspergillus ochraceus and your health

A. ochraceus spores are considered to be allergens and irritants, causing hypersensitivity pneumonitis and dermatitis. A. ochraceus is also known to produce several mycotoxins, such as ochratoxins, penicillic acid, xanthomegnin and viomellin [1]. Notably, A. ochraceus produces ochratoxin A, a carcinogenic mycotoxin which causes serious kidney damage [6, 7].

Because these symptoms are common to many other illnesses, it is difficult to diagnose aspergillosis without visiting a specialist. The severity of aspergillosis is determined by various factors including the state of a person’s immune system. Although everyone inhales hundreds of spores per day, aspergillosis rarely affects healthy people living in normal conditions. However, if you are exposed to high levels of fungal spores at home or at work, you could be at risk.

Because A. ochraceus is a very common indoor mold, particularly in the autumn and winter, you shouldn’t wait to get your home tested for mold.

What allergies are caused by Aspergillus ochraceus?

Like all fungi, this type of mold reproduces by disseminating spores which disperse through the air and settle on different locations developing into new mold colonies if they land in a suitable environment.

It’s when we breathe in these spores that the trouble can start. People who are sensitive to fungal spores may experience allergic reactions to them.

Symptoms of an allergic reaction to fungal spores include:

Especially vulnerable to these reactions are children, the elderly, and people already suffering from pulmonary diseases such as asthma, cystic fibrosis or tuberculosis.

What are health effects of Aspergillus ochraceus mold?

Inhaling the spores of this mold, especially in high amounts, can be incredibly dangerous. In worst case scenarios, excessive spore inhalation can lead to permanent health issues and even death.

A. ochraceus spores have also been associated with the onset and development of asthma in young children [9]. Bronchopulmonary aspergillosis, where fungal spores literally begin to grow and reproduce in a person’s lungs, can (in extreme cases) be deadly. However, only the severely immunocompromised are at risk of an infection of such severity.

Aside from these lung-related conditions, cases of paranasal sinusitis have also been attributed to the inhalation of A. ochraceus spores [8].

Furthermore, A. ochraceus produces a mycotoxin known as ochratoxin A, which can cause serious and potentially life-threatening health issues if inhaled or ingested. A. ochraceus has been reported to be a significant source of ochratoxin A in coffee [10]. Ochratoxin A is a compound with neurotoxic, carcinogenic and immunosuppresive effects. It causes renal tumors and a host of other kidney diseases [6].

In the case of farmers looking to curb the establishment and spread of A. ochraceus in their farms and plantations, various fungicides have been found to be effective. These include copper oxychloride, sulfur, and mancozeb. These are hazardous substances themselves, and their application requires specialized techniques and extensive safety precautions.

For those seeking ways to get rid of mold in their own homes, it’s highly recommended that professional help is sought.

Firstly, there is always the risk of inhaling a potentially dangerous amount of spores during your efforts to get rid of them, whichever method you use.

Also, there is no guarantee that you’ll be able to identify all the mold growths in your home and completely eradicate them, leaving you at risk. Mold can be very persistent and can return soon after it seems completely eradicated. Often, the issue is underlying, and removing the mold will not prevent further colonies from developing. After all, fungal spores are ubiquitous in the air around us and will develop anywhere they find to be suitable.

Once you get in touch with Mold Busters, you can be assured that we will completely remove all mold from your home, wherever it may be growing.

We will do this safely and effectively, and we can provide advice on further steps you can take to ensure the mold doesn’t take root in your home again.

It’s always easier to prevent a mold problem than to deal with it once it gets to you, so it’s well worth the investment to have experts perform a detailed survey of your home even if you’re not too sure what kind of mold you’ve spotted. It’s just one part of making sure your house stays a happy home.