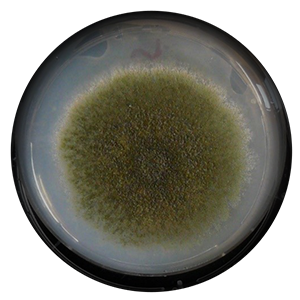 What is Aspergillus nidulans?

Aspergillus nidulans is a member of the genus Aspergillus, family Trichocomaceae, positioned in the Ascomycota phylum. This species can develop both male and female reproductive organs on the same individual and is capable of self-reproduction. Its sexual state is named Emericella nidulans. The fungus has many uses in industry, medicine, science, and bioremediation. For over half a century, A. nidulans have been used in eukaryotic cell biology studies (mutation, recombination, DNA reparation).

Aspergillus nidulans is a homothallic (have both male and female reproductive structures on the same thallus) fungus. This means that it can reproduce asexually and sexually with a possibility to self-fertilize if there is no mating partner. A. nidulans colony haves a wool-like texture with white mycelium [1]. Colonies dark green with white mycelia, abundant conidia, and dark brown color on the reverse [2]Fig 1.

Aspergillus nidulans has a wide specter of temperatures in which it can grow, and with each temperature oscillation, it produces different enzymes, but 37°C (98.6°F) seems to be the optimum. This fungus doesn’t cause any actual food spoilage but has been isolated from cereals and cereal products such as rice, wheat, flour, nuts (hazelnuts and peanuts), dried food, and some spices [3].

Where is Aspergillus nidulans used?

Aspergillus nidulans can produce plenty of industrial enzymes, including cellulases, laccases, lipases, β-galactosidases, proteases, keratinases, cutinases, xylanases, and more. And these enzymes are finding their applications in many industries; some of them are the food industry, brewery, wine industry, biofuels production, textile, and paper industry [4].

Certain strains of A. nidulans produce β-galactosidase used in the food industry for different biotechnological processes. This enzyme converts lactose (the milk sugar) into glucose and galactose, and they are widely used in the production of sugar syrups. Through the biocatalysis of lactose, the taste properties of food can be enhanced by adding the creaminess of ice cream and improving the texture of baked goods. Furthermore, the enzyme releases the monosaccharide (sugars), which improves the product’s sweetness [4].

The textile industry and paper industry

One of the most challenging and most dangerous types of wastewater is from the textile industry. Dye wastewater with its synthetic compounds is very difficult for biodegradation. With the production of laccase enzymes, A. nidulans can decompose a variety of dyes and decolorize wastewater by removing colored phenolic compounds [4]. In the paper industry, enzymes such as cellulases and xylanases are considered an environmentally friendly and great alternative to chemical processes used for deinking waste paper and bio-bleaching [4].

Enzyme cellulase is used to degrade lignocellulosic biomass rich with carbohydrates such as cellulose, hemicelluloses, and others. The hydrolytic reaction of these carbohydrates starts the first step in biofuel production [4].

Anidulafungin is produced from A. nidulans. It is approved semisynthetic echinocandin used as an antifungal drug for esophageal candidiasis, invasive candidiasis, and candidemia. The drug has broad antifungal activity and potency against Candida and Aspergillus spp. including those resistant to fluconazole also appear to be more effective than caspofungin against Aspergillus. It works on destabilization of the fungal cell wall by inhibiting the synthesis of an integral component called glucan, thereby resulting in cell lysis and death [5].

The genome of A. nidulans was sequenced in 2003, and the analysis of the completed genome was published in Nature in 2005. It has 30 million base pairs (the fundamental unit of DNA and RNA) and is around 9,500 protein-coding genes on eight chromosomes. Recently it was discovered that A. nidulans produces caspase-like protease, a family of protease enzymes that play an essential role in programmed cell death [6].

With the improvement of technology, molecular tools have been developed for A. nidulans, allowing very accurate and efficient gene deletions and the production of fluorescent protein fusions. Sequenced and annotated genome combined with these tools and classic genetics has made A. nidulans an excellent model organism for studying mitosis, development, the cell cycle, gene regulation, secondary metabolism, and many other important processes [7].

Genus Aspergillus is known to cause aspergillosis in humans, and the infections vary from low to serious. In the case of A. nidulans, infections are rarely reported. It is an opportunistic pathogen and one of the most frequent causes of aspergillosis in people suffering from chronic granulomatous disease (CDG) [8].

CDG is an immunodeficiency disorder, which can cause recurrent pyogenic infection, granuloma, and cerebral abscess formation. CDG results from non-functioning phagocytes, the white blood cells that engulf and absorb bacteria and other foreign particles. CDG individuals suffering from an infection caused by this fungus, according to some studies, often show resistance to some medication [8]. Some symptoms and signs might be mild or low-grade fever, local pain, swelling, and cough, and sometimes completely asymptomatic [9].

Antifungal medication such as Voriconazole used to treat invasive fungal infections in immunocompromised patients is successful in clearing the infection. A. nidulans can also be contributing to the development of diseases such as cutaneous aspergillosis, maxillary sinus disease, osteomyelitis, pulmonary disease [8][9].

Aspergillus nidulans is ubiquitous and a hardy organism. Some specimens of this species have been isolated from tropical forest soils and sediments of rivers contaminated by petroleum spills, indicating that it is capable of petroleum decomposition [10]. A. nidulans can be used to degrade phenylurea herbicides by using it as a source of nutrition. Furthermore, A. nidulans is very effective in the bio-degradation of linuron, a phenylurea-based herbicide commonly used for weed control in crop plants [11].