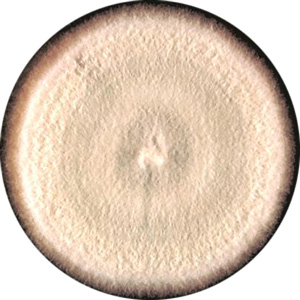 Mold may seem harmless at first glance, but prolonged exposure to certain species of mold can potentially result in a substantial medical bill. Several members of the Acremonium genus certainly fall into the category of molds that can lead to serious health issues if too much time is spent in their presence.

Acremonium is a group of molds that can frequently be found indoors and several of its species are known human pathogens. They have worldwide distribution and can be found in soil and on decaying plant material in nature. However, they are well suited to indoor environments and are amongst the most common fungal colonizers of homes and offices.

The Acremonium genus comprises approximately 150 species [1, 2]. First reported in 1839, the genus was known as Cephalosporium until 1971. This genus consists only of asexual molds (anamorphs) and thus belongs to the fungi imperfecti group [3]. Most of their teleomorph forms are unknown or are still a matter of debate. Acremonium is a polyphyletic genus [4], meaning that members of the group have more than one common ancestor. Therefore, there is a need to reclassify several species into distinct genera.

Most species of Acremonium exist as saprophytes and are not pathogenic in nature. However, 9 species have been identified as human pathogens: A. falciforme, A. recifei, A. kiliense, A. potronii, A. roseogriseum, A. strictum, A. alabmensis, A. blochi and A. astrogriseum [2].

Furthermore, several species are commonly found indoors, including A. strictum, A. carticola, A. kiliense and A. rutilum [3].

Where can Acremonium grow in the house?

Like all molds, Acremonium requires a certain amount of moisture to develop. Most species of Acremonium grow optimally at a water activity levels between 0.90 and 0.98 [3].

They are commonly found in buildings that have suffered water damage. These molds are present in a wide variety of structural materials, such as concrete, wood, fibreglass, plywood, drywall, plaster and wallpaper [5]. Due to their relatively high requirement for water, Acremonium often develops in air conditioning systems, humidifiers, cooling coils, drain pans and window seals [3].

The places you should keep an eye on for mold growth are areas that are frequently in contact with water or moisture, such as bathrooms, laundry rooms, basements, attics and areas around sinks and drains.

Generally, any place where there is an opportunity for a leak should be monitored, so it is a good idea to inspect your roofing, windows and piping on a regular basis. Also, air conditioning units should be serviced regularly, as the condensation in them provides a perfect environment for mold growth.

The pathogenic species of Acremonium have a long list of health effects. They usually cause infections in immunocompromised individuals, but are also known to affect those without any underlying immune issues [2]. Acremonium infections can be classified as superficial, locally invasive or disseminated.

Localized infections usually occur after penetrating skin injuries. Acremonium species often cause mycetoma, i.e. chronic subcutaneous infections. As this type of infection is dependent on environmental factors such as relative density of fungi in the soil, temperature, rainfall and humidity, it is prevalent in tropic and subtropic regions. Mycetoma is most often caused by A. kiliense and A. falciforme [2, 6].

An alarming outbreak of postsurgical endophthalmitis caused by A. kiliense was traced by CDC investigators to a building’s air humidifying system in an ambulatory center for cataract surgery [7]. Patients that contracted the infection underwent surgery early in the day, shortly after the air humidifying system had been turned on.

Similar to several Aspergillus species, Acremonium can colonize the lungs of human beings, which usually results in a growth commonly known as a pulmonary fungal ball. This can occur in people with perfectly functioning immune systems. They are also known to cause growths called bezoars in the gastrointestinal tract [2].

Disseminated fungal infection is a serious condition which can often be fatal. As this type of disease usually affects people who are immunocompromised or already suffering from other diseases, diagnosis can be difficult.

Many of the symptoms can overlap and in many cases the fungal infection is only recognized during autopsy [2]. Disseminated infections occur when the fungus makes it into the bloodstream and spreads throughout the body, infecting practically any organ. It can cause pneumonia, meningitis, cerebritis, perotinitis, arthritis, osteomyelitis and sepsis [6].

Conditions that are associated with disseminated infection include HIV/AIDS, neutropenia, diabetes and leukemia. In addition, people who have undergone organ transplants or bone marrow transplants are also at risk [2].

Acremonium reproduces through asexual spores called conidiospores. If the conditions are right, a mature mold growth will begin to develop spores in great numbers. Upon their release, these lightweight spores are carried by the wind, enabling them to travel across great distances. As Acremonium molds are ubiquitous in nature, humans are almost constantly exposed to their spores and inhale them regularly. However, in most cases this is dealt with by the immune system appropriately and no symptoms arise. However, sensitive individuals may experience a reaction to the spores if they are inhaled in a significant amount.

Several members of the Acremonium genus have been associated with type I allergies such as hay fever and asthma. Two studies of indoor air quality report a low prevalence of Acremonium and conclude that their contribution to fungal allergies is likely to be low [3]. However, as a tertiary colonizer Acremonium acts in conjunction with several other fungal species and discerning the precise contribution of each species is challenging.

Acremonium has also been linked to hypersensitivity pneumonitis [8, 9]. One study reports Acremonium as the culprit in cases of hypersensitivity pneumonitis associated with the use of ultrasonic humidifiers. Although cultures of water from the humidifiers grew a variety of fungal and bacterial organisms, all patients tested positive for Acremonium antibodies – which suggest that this fungus was the common denominator [9].

Several species of Acremonium can produce mycotoxins under certain conditions. These mycotoxins can have cytotoxic, nephrotoxic and tremorigenic effects if ingested in significant amounts. However, cases of Acremonium mycotoxicosis are limited to livestock and other animals – no human cases have been reported [3].

How to get rid of Acremonium?

Mold can be harmful to you and your family, so removing it should be a top priority. In the case of a small, isolated colony you could attempt to remove it yourself using a solution of water and bleach. Spray the growth with the bleach solution and scrub it with a soft brush. However, as any agitation of the mold will release spores into the air, you should take precautions when attempting to remove mold yourself. It is advisable to use protective clothing, goggles and a respirator. Also, the area should be well ventilated by using an electric fan to blow the spore-rich air outside. Any air conditioning or ventilation systems should be turned off so they won’t get contaminated by the spores.

In cases where the infestation is significant, the most important step is to find the underlying cause of the mold growth first. Removing the mold without sorting out any hidden issues is a waste of energy, as the mold will re-emerge after a certain time – often as little as a couple of weeks.

A discreet issue such as a leaking pipe deep inside a wall, a slow leak in the roof or a poorly isolated basement can often be the root cause of mold development. Once the mold sets in, a vicious cycle of mold growth and spore release will begin and the only way to stop it is to prevent the one thing that enables mold to develop – moisture.

If you have a mold infestation that you are struggling to remove yourself, it is best to enlist the help of a professional mold remediation service. At Mold Busters we offer comprehensive mold testing and remediation services. We have 15 years of experience when it comes to inspecting and removing mold and we have given a new lease of life to thousands of homes during this time. Call us today or book an appointment online.