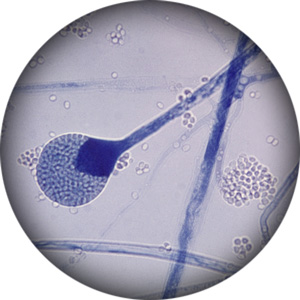 Fungi are ever present in the environment, both in nature and in urban settings. As many of them are important decomposers, this group of diverse organisms is vital to the functioning of nature. The world would likely be a very different place without them.

However, once they start colonizing our homes they are a nuisance or even worse – a threat. Not only is mold unsightly and unhygienic, some species can even cause a range of diseases, ranging from common allergies to acute and often fatal diseases. Absidia is definitely a mold to look out for, as it combines two properties that make it a serious threat to humans – it grows indoors and is a human pathogen.

This article will provide a review of the Absidia genus and will discuss its biology and its impact on humans.

Absidia is a genus of ubiquitous soil inhabiting fungi. They belong to the Mucorales order of the Zygomycetes division. Most species are saprobes, predominantly existing in warm soils. Some of them can also be found in decaying vegetation and rotting fruits. Due to their ubiquity, they have significant interactions with humans. Namely, they are common agents of food spoilage and are frequently found in indoor environments [1].

They can grow at a wide range of temperatures and develop optimally between 20-42°C [2]. The ability of several species to grow well at temperatures of 37°C and above enables them to be opportunistic pathogens of humans and other animals. A small number of Absidia species are known to cause a wide variety of infections in humans, some of which can even be fatal.

Similar to many other genera of fungi, the taxonomy of Absidia is complicated and ever changing. According to various researchers, the Absidia genus comprises anywhere from 12 to 21 species.

By far the most important species is Absidia corymbifera, as it can develop indoors and is known to be pathogenic to humans. Although its taxonomy is under dispute, with many taxonomists placing it in the Mycocladus or Lichtheimia genera, we will discuss it here as it is still frequently placed under Absidia in medical settings.

Absidia ramosa is another important human pathogen, which was until recently considered synonymous to A. corymbifera.

Absidia ornata has also been reported to cause human infections in a small number of cases [3].

Other significant species of Absidia include A. coerulea, A. cylindrospora, A. glauca and A. spinosa [1].

Where can Absidia be found?

Absidia is a genus with worldwide distribution. As mentioned earlier, most species of Absidia live in soil or decomposing plant matter.

A. corymbifera is known to cause spoilage of food and can be found in spices, nuts and grain products. The same species is considered to be a common indoor mold [1]. It can grow on building materials with high cellulose content and has been isolated from mattresses, carpets, books, potted plant soil and bird droppings [4].

Studies have shown that 5-8% of homes with mold issues are contaminated with Absidia [1].

Furthermore, Absidia often develops in hay, cereal grains, flour and animal feed. It is frequently found in rural environments, especially in large industrial and agricultural facilities. As such, it has recently been associated with an occupational disease called Farmer’s lung disease [3, 5].

Absidia species are considered to be important causative agents of disease in humans and animals [2]. The diseases they cause are collectively called mucormycoses. Apart from Absidia, mucormycosis can be caused by members of several other genera belonging to the Mucorales order, such as Rhizopus, Mucor and Cunninghamella.

Mucormycosis is a relatively rare disease and usually affects people with weakened immune systems or individuals already suffering from an unrelated disease. HIV/AIDS patients, people suffering from certain types of cancer (particularly from haematological malignancies) or uncontrolled diabetes are at risk. Individuals taking immunosuppressive therapy or long term corticosteroid therapy make up another at risk group. Nevertheless, mucormycosis has been known to affect otherwise healthy people with no underlying conditions [6].

Mucormycosis most often affects the sinuses, brain and lungs. However, this fungal infection can also occur in other parts of the body, such as the gastrointestinal tract, the skin or other organs, and can invade the blood stream to reach organs far away from the initial site of infection. It is an extremely serious disease with a high mortality rate. Infections of the sinuses and brain have a mortality rate between 30 and 70%. Disseminated infections are fatal in 90% of cases [7].

The most common route of infection is inhalation. Fungal spores are present in the air around us, and their concentration can reach dangerous levels in mold infested homes. In most cases the immune system deals with these inhaled foreign bodies. However, if the immune system is weak or fails due to another reason, the spore will germinate in the respiratory tract and begin to develop into a fungal growth.

Physical trauma is another common route of infection, particularly in healthy, immunocompetent people. Cutaneous and subcutaneous infections can occur if wounds are contaminated with soil or plant material [3]. Also, use of non-sterile bandages and dressings can lead to infections in hospital settings, typically in burn patients.

Absidia species are considered to be the second or third most prevalent cause of Mucormycosis (after Rhizopus oryzae). Interestingly, this varies geographically: Absidia are involved in 5% of mucormycosis cases in the USA, 19-29% in Europe, and 40% in Egypt [3].

A. corymbifera is the species most often isolated from human infections, accounting for 84% of cases in Europe [8]. However, the fact that A. corymbifera and A. ramosa were considered to be the same species for a long time highlights the difficulty in correctly identifying these fungal species, and A. ramosa may have been wrongly identified in many cases [3].

Symptoms of Absidia infection depend on the area of the infection. Symptoms of rhinocerebral infection (the most common form of the disease) include facial pain, fevers, one-sided headache, nasal congestion and lesions on the roof of the mouth.

Symptoms of pulmonary mucormycosis include dyspnea, cough, chest pain and fever. Gastrointestinal infections are characterized by abdominal pain, nausea, vomiting and gastrointestinal bleeding. Cutaneous infections, which often occur in healthy individuals typically present themselves through pain, warmth, excessive redness of the skin, blisters or ulcers, discoloration of the infected area or excessive swelling around a wound [9].

Absidia is reported to be a common indoor allergen. It is also associated with hypersensitivity pneumonitis, especially in rural settings [1].

Absidia spores can cause a variety of allergic manifestations (especially in children and sensitive individuals) such as asthma, hay fever or rhinitis.

How to get rid of Absidia?

If you’ve made it this far, you surely realize that this is not a mold you want to share your house with. All house dwelling molds are dangerous in one form or another, and Absidia is arguably one of the worst offenders.

Although its diseases are less common than those caused by Aspergillus or Candida, it is still a major health hazard. Therefore, if it’s growing in your home it should be removed as soon as possible.

However, this is easier said than done. Mold can be extremely persistent and difficult to remove. Often the problem occurs due to an underlying issue related to moisture, such as poor isolation or a pipe leaking somewhere in the walls. Most people focus on the visible mold and remove it, only for it to return after several weeks. Of course, if a mold was present it likely released millions of spores into the air – one of them reaching the moist area again is all it takes for the mold to re-emerge.

In many cases, hiring a professional mold removal service is the way to go. Mold Busters have 15 years of experience and a proven track record in removing mold infestations. We offer a comprehensive set of mold related services, including dehumidifying, indoor air quality testing, mold testing and mold removal.

Our technicians have the know-how and the equipment to get the job done professionally and thoroughly. In addition, we are able to point out any underlying issues that need to be fixed and can provide advice on any steps that need to be taken to guarantee a mold-proof future. Call us today to book your appointment.